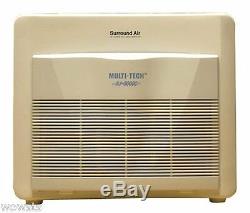 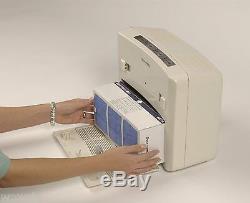 Multi-Tech XJ 3000 Air Purifier. True HEPA Filter for the most effective protection against dust & allergens. Recommended by Department of Homeland Security and U.

Germicidal UV Lamp to destroy micro-organisms such as germs, viruses, bacteria and fungi (such as mold toxins). Activated Carbon Filter for chemicals, gases odors and cigarette smoke. The most absorbent filter material known to man. Ionizer which disperses negative ions to seek out and remove particles & bacteria from the air.

Proven by government studies to be effective, and to enhance performance of filters. Programmable Sanitizer to neutralize powerful odors. Can be completely turned off when not needed. Includes High, Medium and Low settings for appropriate output according to need.

Anti-Bacterial Pre-Filter for larger particles, lengthening the life of the other filters. Quiet Operation ensuring peace and quiet while running, even with its powerful fan. Low Energy Usage ensuring low electricity costs, even if running the Multi-Tech continuously. Images from Smoke Removal Test Video. The Multi-Tech clears away the thick smoke in this air tight chamber in a matter of seconds. Proof that it effectively and efficiently removes even fine particles from the air. Everything You Need in an Air Purifier. Many air purifiers claim to be effective, but few air purifiers on the market can provide proof that they are effective. The Multi-Tech air purifier has proven to be nearly 100% effective in clinical test results. Most Effective Dust & Allergen Filter Available. True HEPA filters recommended by the Dept. Of Homeland Security are more effective than any other type of air filter at capturing dust, pollen, ragweed, dust mites, mold spores and other allergens. Furthermore, in a Journal of Hygiene study, negative ions were found to improve efficiency of filter units. A Way to Kill Micro-Organisms. Most air purifiers do not have a way to destroy germs, viruses and other micro-organisms. A germicidal UV lamp is the most effective way to meet this requirement. UV light air purification is recommended by the U. Centers of Disease Control (CDC). Multi-Tech ionizer is also effective against micro-organisms. Of Agriculture studies show that negative ion air purification (ionizers) effectively reduces bacteria. The Ability to Remove Chemicals, Fumes & Gases.

HEPA-only air purifiers cannot remove these prominent household pollutants from the air. An activated carbon filter is necessary for this job. According to Penn State Dept. Of Aerobiological researchers, carbon filters serve to remove odors, volatile organic compounds (VOCs) and chemicals that other filters cannot. A Way to Reduce Cigarette Smoke & other Odors.

Many air purifiers do not have an answer for these either. The Multi-Tech has multiple technologies for these pollutants, including the activated carbon filter, ionizer and programmable sanitizer.

Seeks & Destroys Pollutants Across the Room. Negative ion air purification is particularly capable of neutralizing airborne pollutants that do not pass through the filter.

The Multi-Tech circulates trillions of negative ions with a powerful fan to maximize this ability. Of Agriculture found negative ion air purification (ionizers) to be 99% effective at removing airborne dust & particles.

The Multi-Tech air purifier has been awarded ETL certification , proving that it is safe to use in your home or office. Like most people, you are probably too busy to remember to clean your air purifier. Fortunately, the Multi-Tech does not require maintenance, so you can get on with your life, while still experiencing pure air.

Tests show that Multi-Tech and its 6 powerful technologies effectively remove a broad range of pollutants. Consumer Reports Top-Rated Air Purifier. Better or Comparable Performance to Other Brands Costing More Than Twice as Much!

Government recommends technologies used in the Multi-Tech XJ-3000C air purifier. Centers of Disease Control (CDC) recommends air purifier with both HEPA Filter and UV Light. Recommends UV lights in homeless shelters to prevent the spread of disease, particularly TB (tuberculosis). Of Homeland Security recommends HEPA air filters, along with a pre-filter to preserve the life of the HEPA filter. Of Agriculture found negative ions (ionizers) to be highly effective against dust and bacteria in recent studies.

Just a partial list of the many types of pollutants removed. The Hepa air filter in the XJ-3000C is highly effective at capturing solid particles such as dust and dust mites. According to the Journal of Hygiene, ionizers help to increase the efficiency of filters, by causing airborne particles to conglomerate, making them easier to capture. Plus, negative ions also cause airborne particles to precipitate out of the air you breathe, and have been found to be extremely effective at controlling dust by U. UV light can be deadly for dust mites. Many bacteria are effectively captured by the Hepa air filter, as well as the anti-bacterial pre-filter (which also disinfects bacteria). The germicidal UV lamp serves to disinfect the bacteria trapped by the Hepa filter. Plus, according to studies by the U.

Of Agriculture, ionizers/negative ions are extremely effective at reducing airborne bacteria. The XJ-3000C also includes a photocatalytic oxidation filter, which has proven to be effective at destroying bacteria. Hepa air filters are commonly recommended filter for allergens, and are generally considered the most effective filter for allergens. Ionizers/negative ions increase the efficiency of filters by causing airborne particles to conglomerate, making them easier to capture. Plus, negative ions also cause airborne particles to precipitate out of the air you breathe.

Mold spores are effectively captured by Hepa air filters, especially with the help of ionizers/negative ions. UV light is deadly against the microbiological toxins associated with mold. The activated carbon filtration and photocatalytic oxidation technologies used by the Multi-Tech XJ-3000C are effective against mildew smells. The carbon air filter in the XJ-3000C absorbs smoke particles and the toxic chemicals associated with cigarette smoke. With the help of the photocatalytic oxidation filter, it also helps to reduce or eliminate odors from cigarette smoke.

Also, photocatalytic oxidation has proven to be effective at breaking up chemical compounds. Furthermore, the ionizer also helps to neutralize chemical fumes. The UV light is deadly against micro-organisms such as germs/viruses, and highly effective at destroying them as they pass by the UV lamp. Negative ions have also been known to help to neutralize viruses. Both the photocatalytic oxidation filter and activated carbon air filter are effective at eliminating or reducing strong odors.

A statistically significant decrease of CO values was found with an ionizer activated. This was discovered by researchers at Brompton Hospital in London, and published in European Respiratory Journal. I cannot overstate this enough. I have been so impressed [with the XJ-3000C]. My house is now dust-free.

I have no smell or sight of mold. I've had no side effects from the purifiers either. Very interestingly, my family no longer passes viral illnesses amongst one another. If one of my sons picks up a virus or something at school, neither I nor the other child contract it now that we use the Surround Air purifiers. Before this, like in every other house, if one family member became sick, everybody would. Thank you from the bottom of our hearts for making such a wonderful product that saves lives! The cats THANK YOU also.

We have been in the area hit by Hurricane Katrina... With black mold and other bacteria.

I had developed a dry cough. In just a short time I felt better and was sleeping better. The next morning, I awoke for the first time I can ever remember with nasal passages clear enough to breath through my nose! I have had the most expensive hepa filters and none compare to your product. Surround Air's XJ-3000C Hepa & Ionic Air purifier surpasses my expectations in every way. Its fan is powerful yet soothingly quiet. It has a sleek design and is constructed to last. Bob Heymann, President, Beacon Wine Company. Air Ionize r/Negative Ions for allergens, bacteria, viruses, chemicals and more. HEPA Air Filter for particles including dust and mold spores. Germicidal UV Light for microbes such as viruses, germs, bacteria, and fungi. Activated Carbon Filter for chemicals, gases, cigarette smoke, and odors. Optional/Programmable Ozone for strong odors and filter sanitization. Can be turned completely off. Ionization Method: Needlepoint (ion-producing electrode pin).

Nanometer Frequency: 254 nm, the ideal frequency for destroying DNA cells of microorganisms. UV Lamp Life: 10,000 hours (over a year). Ozone Output Settings: Off, Low, Medium, High. "Off" Setting: Ozone Completely Disabled. On this setting, the Multi-Tech produces virtually no ozone at all.

What we will do: Repair or replace any defective parts. Pack the product in its original carton, and in the same manner in which you received it, or as identical as possible. We are very happy with the Surround Air Systems. The item "XJ-3000 HEPA Air Purifier for Smoke, Allergen, Pets, Home ROOM FILTER" is in sale since Tuesday, September 15, 2015. This item is in the category "Home & Garden\Home Improvement\Heating, Cooling & Air\Indoor Air Quality & Fans\Air Purifiers".

The seller is "wowsts" and is located in UT. This item can be shipped to United States.